This month we had an excellent demonstration night by Tony Halcrow, one of our Club’s founding Members.

Tony started the demonstration by making a baby rattle from some English Ash that was collected locally in High Cogges. He described the project as simple enough that any of us could do it; Tony explained that he’s not a professional turner, and that we are all capable of turning as he does. 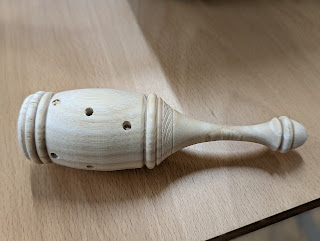 The holes were drilled in the faces of the spindle blank before starting, and decoration was added along the way by use of a spiralling tool and a point tool. The hollow cavity was intended to take a bell but Tony could not find it; a couple of coins were substituted but I’m sure a wooden ball or two would perform equally well.

Tony then moved on to the second project of the evening; a multi-axis goblet. He started by drilling the end of the blank with a modified spade bit, and proceeded to demonstrate the principles of turning on multiple axes and the shapes that result. 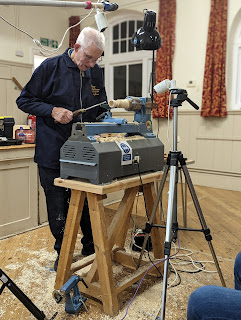 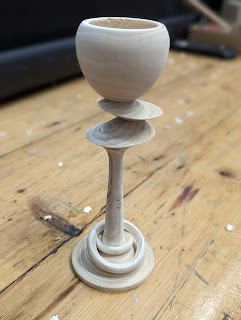 The audience asked for a captive ring on the stem of the goblet, and Tony gladly demonstrated, emphasising that we are all capable of making them. He then proceeded to make a second ring, small enough to pass through the first, before finishing the stem and parting off.

Those of you who would like to find out more about multi-axis turning are directed to the excellent book by Barbara Dill; I have a copy on my bookshelf and I know that Tony has worked his way through most of it too. 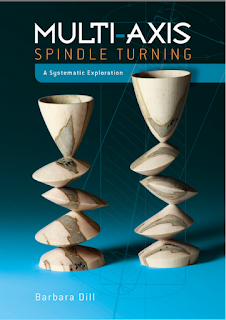 Find it here on Amazon.

The competition project for this month is a baby rattle or a multi-axis spindle
turning, as inspired by Tony’s demo. The next Club meeting is on 10th November
and will be a “hands-on” session.

Finally I’d like to thank everyone for the beautiful wedding gifts that were presented;
they are very thoughtful and will be well used.

July’s club night was a great hands-on session and we had several new visitors
come along to try their hands at turning.

Our next Club night was scheduled to be 11 th August, but unfortunately we will be
unable to access the Village Hall this month due to building works. As such the next
meeting will be 8 th September, with apologies to all for having to miss a session.
September will be a Hands-on session, and I’ve been cutting some spindle blanks to
keep our “Club wood” well stocked.

I’d like to welcome any feedback on the running of the Club, and if any Members are
interested in joining the Committee then please let me know. I’d also like to invite
suggestions from Members as to what they would like to see going forward, both in
terms of Demonstrators and also Monthly competition projects. As a Member, this is
your Club, and it is important that you feel engaged and interested in what we do
here.

If Members wish to send correspondence, please do so via the Ace North (Club
Secretary), or directly using my personal email (finnemore.daniel[AT]googlemail.com)
if preferred.

The competition theme for our September meeting will be a candlestick (or
matching pair/set). These can be as plain or as elaborate as you have time for, and
with August’s meeting cancelled there is even more time to produce something to
display. 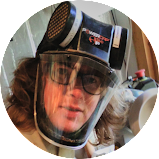 Ace North,  Honorary secretary
Dear Members,
I thought I'd do the newsletter this time to give Dan a few minutes off - use them well Dan!
This month we were treated to what I thought was a fantastic demo by John Boyne-Aitken, aka "The Bowler Hatted Turner". Here he is (though without the hat!): 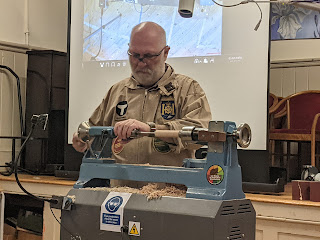 John's been turning all his life and it shows. In the first half of the demonstration, he showed us how to make a cake stand. When John's daughter wanted afternoon tea at her wedding, John was tasked with knocking out a few cake stands - only 50! So he got the production of very nice Ash cake-stands down to a fine art. 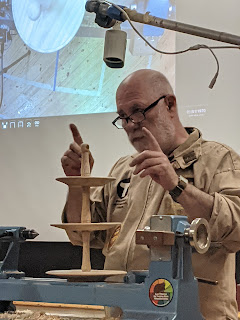 It looks like a fun challenge to make one - and so we decided a cake-stand is (one option for) the months challenge! (The other being a needle case - see below).
In the second half, John made a screw-top needle case. Chasing a thread isn't something I've ever had a chance to try, but John made it look easy (though I'm sure it isn't!). He then textured the cases using a Robert Sorbey texturing tool. John made his needle case. Here are three of John's cases (one of which is the one he made for our demo; out of castello box (Calycophyllum multiflorum; I looked it up;-)): 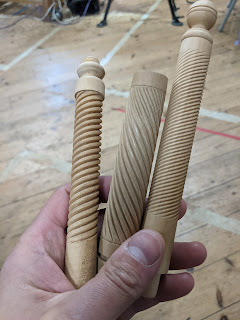 For beginners like me, here is a top tip from John: practice on a piece of hard plastic pipe. 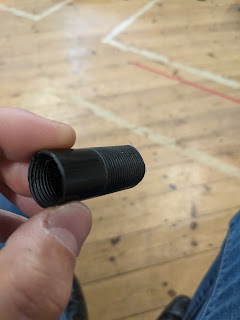 Our thanks to John for an excellent demonstration - both entertaining and instructive.
I'll look forwards to seeing many of you next month at the hands on night.
All the best,
Ace

It was great to see so many of you attend last week for our hands-on Club night.